My research is centred around archaeological exploration in southern Greece. I work in the Mani peninsula, just south of ancient Sparta, and am currently the co-director of The CARTography Project (https://cartographyproject.com), a Digital Humanities mapping project in which we analyze and recreate the routes of early modern travellers. I am working on a book on the site of ancient Tainaron, the mythical entrance to the ancient Greek Underworld and the location of a famous sanctuary to Poseidon throughout classical antiquity. I am also interested in ancient and modern cultural identity, ancient religious space, the history of travel, archaeological survey, women in the ancient world, animals and nature in antiquity, landscape studies, and Digital Humanities. My latest project is Peopling the Past (https://peoplingthepast.com), an initiative that creates open-access materials for learning about real people who lived in the ancient Mediterranean world - I host the Peopling the Past podcast, which just finished airing its second season!

Check out my research on Tainaron, the entrance of the ancient Greek Underworld, here:

Take a look at the results from the first season of the CARTography Project, here:

Listen to the Peopling the Past podcast here:

My teaching covers many areas of the ancient Mediterranean, including Greek & Latin language and literature, the history of the Graeco-Roman world from the prehistory to late antiquity, mythology, religion & sacred space, and women, gender & sexuality in antiquity. I specialize in courses on archaeological topics, such as: Introduction to Archaeology, Greek & Roman Art & Archaeology, Archaeology of Daily Life, and Ancient Sanctuaries.

I believe strongly in a multi-disciplinary and a hands-on, experiential approach to teaching and learning, both within the traditional undergraduate classroom as well as on archaeological field projects, study abroad opportunities, and through workshops and other public-facing activities. My primary objective as a teacher is to enable my students not only to think analytically and critically about our interpretation of the texts and material culture of the ancient world, but to contextualize said information from antiquity and to apply it in such a way so as to better understand the modern world in which we live. The skills I impart in the classroom prepare students to be productive and engaged citizens and potential future academics themselves.

My teaching is also grounded in the instruction of the Digital Humanities, and I incorporate skills such as website-building, database management, social media interaction, and artifact digitization into the classroom so as to provide valuable training that will benefit students regardless of their future careers. Ultimately, I believe that students learn best when challenged, informed, and inspired, and I strive to achieve all three both inside and outside of the classroom.

Women in Antiquity:  A collaborative project for the study of women in the ancient world; contributions by undergraduate students in courses on women, gender, & sexuality in antiquity.

WikiEducation: I teach with Wikipedia in many of my undergraduate courses (Introduction to World Mythology, Classical Greece: State and Society; Rome: Republic and Empire) and students work on improving Wikipedia instead of writing a traditional research paper. These assignments provide an opportunity for students to engage with impactful research that will affect global knowledge on various topics.

Interactive Visual Map of Rome on Instagram by Nick Despres

The Amphitheatre of El Djem website by Luna Nishiyama

“Looks Like We Made It: But Are We Sustaining Digital Scholarship?” (with G. McIntyre, K. Solberg, & L. Tweten) in Making Things and Drawing Boundaries: Experiments in the Digital Humanities (Debates in Digital Humanities Series, Vol. II) edited by J. Sayers. University of Minnesota Press. 95-101.

“From Stone To Screen: Copying Cuneiform in the Digital Age” (with N. Kraus and L. Tweten). In Implementing Meanings: the Power of the Copy Between Past, Present and Future. An Overview from the Ancient Near East (Altertumskunde des Vorderen Orients Band 19), edited by S. DiPaolo. Ugarit-Verlag. 181-194. 2018. 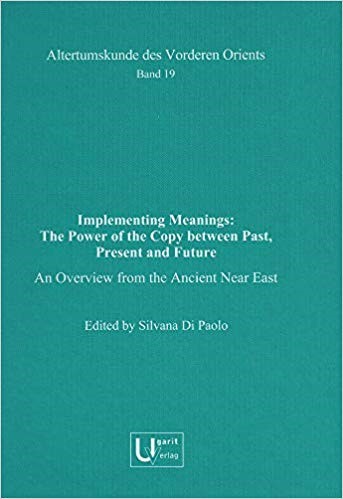 “Euboean Towers and Aegean Powers: Insights into the Karystia's Role in the Ancient World” (with R.M. Seifried). Journal of Greek Archaeology 1. 149–176. 2016.

“An examination of a remarkable white-ground lekythos from the University of British Columbia's Museum of Anthropology” Mouseion, Series III, Vol. 12. 143–154. 2012.

Co-Director of From Stone to Screen a collaborative, multi-disciplinary, Digital Humanities digitization and interactive pedagogy project.

FIREcast Podcast: From Stone to Screen (2014)